Skip to content
View cart “Buy Kurupt’s Moonrocks Online” has been added to your cart.
Sale!

Mazar by Dutch Passion is perfect for anyone wanting to make hash at home. It’s well rounded and solid genetics exemplify everything that is right about the older generation of cannabis strains.

Mazar by Dutch Passion is an old-school classic that still remains popular to this day. Dating back to the 1980’s, the Mazer strain was the outcome of breeding an exemplary specimen of Skunk #1 with a potent Afghan strain. Becoming an instant hit with the cannabis community, Mazar was then later improved upon with stronger genetics in 1997. The fact that this time-honoured legend remains so popular is a testament to its quality.
The name itself comes from one of the biggest hash producing regions of the world – the Mazar-i-Sharif area of Northern Afghanistan. As you can probably imagine, the Mazar strain of cannabis stays true to its namesake, and is perfectly suited to hash production.

We found Mazar to have a sweet, yet earthy taste and aroma, bringing forth hints citrusy pine flavours. It is a flavour that hallmarks an Afghan strain, and will certainly be enjoyed by the hash lover. Being slightly indica dominant, Mazar’s high is mainly physical, relaxing and easing the body; but it also induces a calm and meditative cerebral high as well, allowing for 100% total relaxation. As you can probably imagine, we found this high best suited to when you don’t have much going on, like at the end of the day, or when you are kicking back and getting lost in some music. It is worth noting, the THC content of Mazar is around 20%, making it very potent.
Unfortunately, the CBD content of Mazar is unknown to us, so we can’t really comment on any real medical potential. However, anecdotally, Mazar is meant to excel when it comes to pain relief. 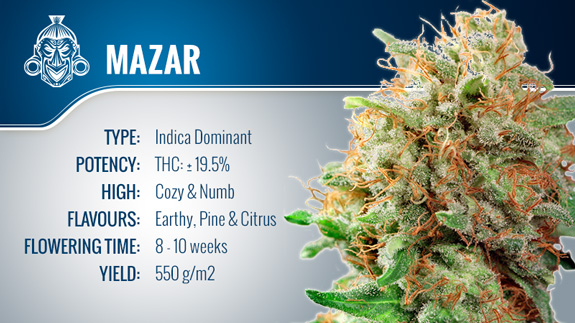 There are no reviews yet.

Be the first to review “BUY MAZAR ONLINE” Cancel reply